Japanese Knotweed removal in Northern Ireland and the Republic of Ireland

Japanese Knotweed (Fallopia Japonic) is the single most common invasive weed species to be found in Northern Ireland, The Republic of Ireland and across mainland UK.

In the land of its origin, Japan (also China, Korea, and Taiwan), native predators provided an effective buffer to the plant’s spread. Sadly, that is not the case in the UK, ROI and Europe. Japanese Knotweed presents a very clear threat to our gardens, buildings, the countryside, and wildlife, with effective identification by the Japanese Knotweed Company your first step towards a successful long-term solution to the problem. We specialise in the removal Japanese Knotweed and other invasive plants throughout Northern Ireland and the Republic of Ireland.

What is Japanese Knotweed and why is it such a threat in Northern Ireland?

Japanese Knotweed likes nothing better than to invade grounds, gardens, buildings, and roads. Quick spreading and infinitely more stubborn than the proverbial ‘mule’, it has been become the scourge of gardeners and homeowners across the country. Virtually impossible to budge by conventional means, Japanese Knotweed returns again and again, despite best efforts at its eradication. It’s the weed’s ability to spread and regenerate that causes sleepless nights amongst authorities and private individuals charged with dealing with the problem. Early identification and swift action is required to effectively slow, stop, and permanently remove this most intrusive of weeds.

When Japanese Knotweed first arrived in the northern hemisphere it was welcomed with open arms. Introduced to the UK and Ireland in 1850 by well-heeled, well-travelled Victorians, Japanese Knotweed was actually considered quite desirable. Who could have predicted that this supposedly exotic plant would spread like wildfire and prove to be such a dogged adversary?

From pristine Victorian gardens, Japanese Knotweed reached out into the environment, spreading rapidly, smothering native vegetation, and forever altering our wildlife’s habitat. Some conservationists point to Japanese Knotweed’s ability to provide nectar for bees and butterflies during its flowering period towards the end of the summer, but the negative aspects of the weed’s spread far out-weigh the positives. From river banks to roadsides, quarries to urban waste ground, Japanese Knotweed’s familiarity can mask its truly damaging effects. Japanese Knotweed Management provides a tried and tested solution to the problem.

Arrange a survey of your premises

How to spot Japanese Knotweed 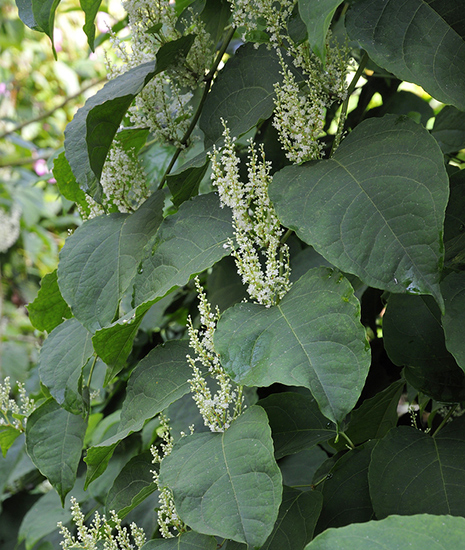 So, what does Japanese Knotweed look like? The Japanese Knotweed has a hollow, almost bamboo-like stem with ‘shield’ or ‘heart-shaped’ leaves, often with a pale stripe along the middle. A large plant (growing up to 3m in height) it creates an extensive network of roots (rhizomes) which aid survival during the winter months (when the leafy part of the weed recedes into a brown wasted stem). It only takes a small fragment of this root (finger-nail size) to regenerate. In spring Japanese Knotweed produces red-tinged shoots that quickly morph into dense clumps or ‘stands’. This most invasive of plants can reach maturity by June. Particularly common along railway tracks, roads, riverbanks, derelict sites, and gardens, its spread is accelerated by dumping or ‘fly-tipping’ in soil or waste.

As previously mentioned, Japanese Knotweed has an extensive network of roots hidden beneath the surface. Although this weed tends to extend skywards for approximately 3m, it can also grow laterally through the soil some distance away from the main plant (typically 2-3m, sometimes more) and to a similar depth! Even in areas proliferated by vegetation, Japanese Knotweed roots somehow managed to reproduce, tiny fragments of Japanese knotweed rhizome can grow in to new plants, mature to flowering and dominate the canopy within a few years.

Japanese Knotweed and the law in Northern Ireland & ROI

Such has been the damaged caused to property and the environment over the past century and half that in 1981 it became a criminal offence to cause the growth of Japanese Knotweed in the wild, in the UK. In 1985 Northern Ireland followed suit with Article 15 of the Wildlife Order. In 2011 the Wildlife Order under the Wildlife and Natural Environment (NI) Act 2011 (known as the WANE Act) added further animals and plants to protected species lists and improved enforcement powers. Although it’s not an offence to have Japanese Knotweed on your land, there is a general acceptance that landowners have a responsibility to treat the problem. If the weed, or any other invasive plant, spreads from one property to another, it may be considered a nuisance in civil law but we frequently help neighbouring property owners to resolve such matters without recourse to legal opinion or the courts. It should also be noted that disposing of knotweed by cuttings or excavations (a major reason for the plant’s spread) places a duty of care on the landowner (refer to: The Waste and Contaminated Countryside Land NI Order 1997). Failure to deal with your Japanese Knotweed problem can devalue your property. On the flip-side, it can also prevent a potential buyer from securing a mortgage.