Giant Hogweed is found in every corner of the British Isles, Giant Hogweed (Heracleum Mantegazzianum) is not only invasive, but potentially extremely harmful. A native species of Asia, the Giant Hogweed is now prevalent in North America and Europe.

More than 16-feet tall when in flower (hence the ‘Giant’ moniker) it colonises wasteland and river banks, produces between 30,000 and 50,000 viable seeds per annum, and can cause painful rashes and other skin complaints.

How to recognise Giant Hogweed 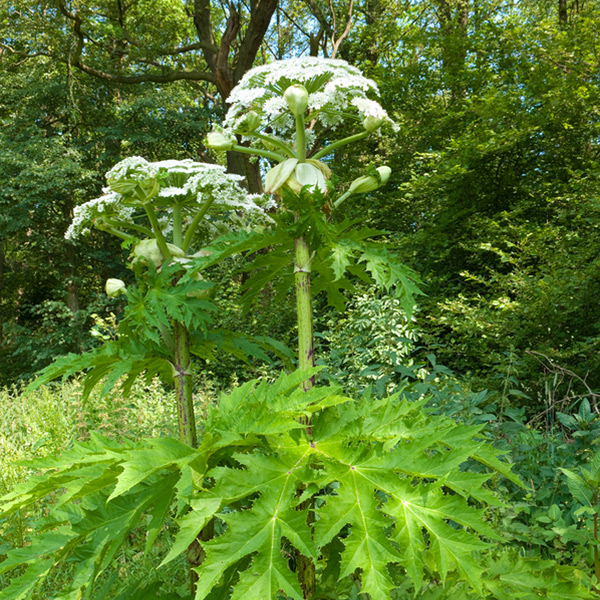 Giant Hogweed is a member of the parsley or carrot family (Apiaceae) and resembles cow parsley with its thick bristly stems pockmarked with purple. Brought to this part of the world as an ornamental plant for parks and gardens, Giant Hogweed flowers are large (as much as 60cm) and white. The stem is rigid and hollow.

Generally capable of flowering only once in a lifetime (monocarpic), the seeds, like the Himalayan Balsam, can be dispersed by humans or animals, and on water. They can also be carried by wind. During the first year the Giant Hogweed displays ragged, lobed leaves, before flowering and setting seed.

What are the dangers of Giant Hogweed?

It’s fair to say that humans and Giant Hogweed don’t see eye-to-eye. This invasive species can cause severe burns to the skin and, if the sap toxins come into contact with eyes, even has the potential to blind. In short, it’s a public health hazard.

Hand-cutting Giant Hogweed should never be undertaken unless you are wearing fully-protective clothing. If the skin becomes contaminated by sap (which is released when stems are broken or cut), and is then exposed to sunlight, it can result in painful blisters known as Photo-Dermatitis. Children are particularly at risk. Playing in hogweed patches, or brushing up against a broken stem, can cause burns.

How to control and eliminate Giant Hogweed

Giant Hogweed seeds can remain dormant for up to ten-years, making total eradication all the more difficult. Add in the large amounts of seeds produced (30,000 to 50,000 per plant) and you begin to see the scale of the problem. In order to be effective, treatment should be undertaken on an annual basis, with early spring until the start of summer the best time).

So, what forms of control and treatment are available? As with Himalayan Balsam, there are two courses of action…Non-Chemical and Chemical.

Giant Hogweed is governed by The Wildlife and Countryside Act of 1981 (1985 Wildlife Order in Northern Ireland), stating that it is an offence to introduce this invasive species to the wild. Basically, if you are transferring soil from one site to another, and that soil contains hogweed seeds, you are in contravention of the Act.

Any soil or that contain hogweed seeds must be removed and taken to a licensed landfill site for disposal. Relevant Waste Transfer documentation must be completed under the Environmental Protection Act 1981 (Duty of Care Regulations 1991).

If you are in any doubt as to where you stand legally, please don’t hesitate to get in touch with Japanese Knotweed Management. We will be only too happy to advise.

To Arrange A Survey Of Your Premises

please fill out our form here to arrange a survey